Apostle Paul and the Winds of Crete

Written by Ronald J. Gordon Published: February, 2016 ~ Last Updated: April, 2021 ©
This document may be reproduced for non-profit or educational purposes only, with the
provisions that this document remain intact and full acknowledgement be given to the author.

Among biblical commentators and educators, there exists a degree of uncertainty surrounding the voyage of Apostle Paul around the Greek island of Crete, particularly the need to leave the port of Fair Havens, why the ship was docked there in the first place if it was not suitable for winter lodging, why Julius the centurion and the ship owner decided (Acts 27:11) to sail to Phoenix or Phenice on the western coast of the island, and the type of storm that was encountered.

Knowing the geographical makeup of the island will be helpful. Crete is a blend of three principal regions: Lowland Hills to the east, High Mountains to the west, and the central Messara Valley, a rich illuvial plain filled with orchards and fields of grain. There are five cities on the north coast, built on the remains of ancient Minoan foundations. Most of western Crete is mountainous, stretching from the eight thousand foot Mount Psiloritis in the central region, to the elongated White Mountain Range with towering peaks between six and eight thousand feet. At several locations, ridges from this mountain range extend down to the Southwest Coastline providing excellent shelter for vessels pummeled by north or northwest winds. It is here in the western half of the island that the prudent ship captain receives protection from storms, not the eastern half of Crete where most of the coastline is bordered by Lowland Hills of only a few hundred feet.

Sailing upon the Mediterranean Sea over the winter months was nearly impossible for square rigged vessels that do not easily tack (zig-zag) into the wind. Vegetius records in the 4th century that sailing in the Mediterranean after September 15th was dangerous and after November 11th was impossible (De re Militari 4.39). Only certain military vessels of the Liburnian Class (propelled by oars) were the exception. Luke states in Acts 27:9 that the “fast” or Day of Atonement was passed, so this would place the beginning of their journey in the “dangerous” period, just before the “impossible” period. Why then was the owner of this grain vessel sailing at this time? One can only speculate that he was trying to squeeze in one last run for the season, since people of the Empire still needed to eat during the winter. The following series of events is suggested as a plausible explanation of the entire Cretan incident. 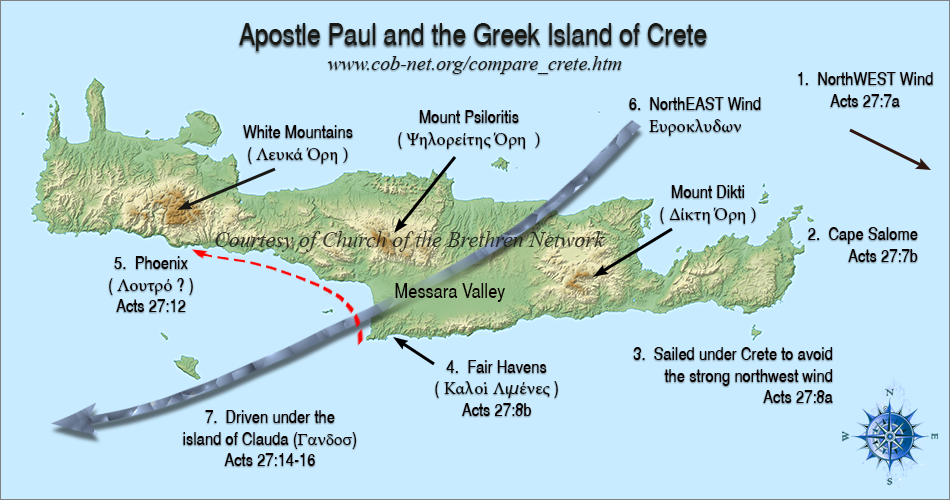 It is reasonable to conclude that the persons in control of this vessel decided to sail to the lee or south of the island of Crete to avoid northwest winds that dominate and endanger winter travel on the Mediterranean Sea. Having successfully gained that route, the captain docks at Fair Havens which is the very last port before rounding the Southern Cape. In this last port they contemplated jumping the twelve mile gap bordering the southern opening of the Messara Valley. The idea is to gain winter rest in Phoenix, a harbor more suitably protected by the western mountain range. A gentle southerly breeze encouraged them to make the effort. But somewhere in the middle of that gap, a northeast squall blew down on them from the Messara without warning. The ship was immediately driven beyond their control, narrowly missing a small island. Contrary to a few biblical translations, it was not a hurricane. This northeast frontal system drove them nearly six hundred miles to the island Malta.

Resources consulted for this article

“Sirs, ye should have hearkened unto me, and not have loosed from Crete,
and to have gained this harm and loss.”
Acts 27:21